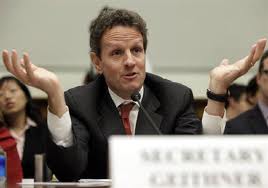 U.S. Treasury Secretary Timothy Geithner went to China this week to tell the Chinese that its dollar assets are safe. In his speech, Geithner renewed his pledge that the Obama administration would cut its huge fiscal deficits. He also promised “very disciplined” spending in the future. He even said that it was possible that the U.S. would return to pay-as-you-go budget rules instead of nonstop borrowing.

And, according to Reuters, the crowd laughed.

Who could blame them‚Ä¶ that’s really funny stuff. And before I go on to say anything that could be interpreted by some as being derogatory, let me just say that I had no idea Geithner was that funny, or that he did stand-up at that level. I do a fair amount of public speaking myself, and let me tell you‚Ä¶ in terms of an opening joke intended to loosen up an audience, what Geithner said there was pure gold.

Geithner went on to say:

“We have the deepest and most liquid markets for risk-free assets in the world. We’re committed to bring our fiscal deficits down over time to a sustainable level. We believe in a strong dollar … and we’re going to make sure that we repair and reform the financial system so that we sustain confidence.”

We have risk-free assets, do we? Entirely risk-free? Sans risk? Riskless? Wow. I don’t know why all the money in the world doesn’t just come here. Why are there even other financial markets? We have the deepest something over here, that’s for sure. Well, as long as we’re “committed” and we “believe” and we’re going to “make sure”. I feel better already.

Keep going Timmy, you’ve got ’em right where you want ’em. You’re on a roll‚Ä¶ do the bit about your strong, unshakable “faith in the dollar,” that always gets them going.

The Obama administration aims to reduce the fiscal deficit to “roughly” 3 percent of gross domestic product from a projected 12.9 percent this year, Geithner reaffirmed. The treasury secretary reiterated that China’s investments in U.S. financial assets are very safe, and that the Obama administration is committed to a strong dollar.

A former Chinese central bank adviser, in response to Geithner’s visit to Beijing, said in an email yesterday:

It may be helpful if “Geithner can show us some arithmetic,” said Yu Yongding. “We need to know how the U.S. government can achieve this objective.”

See‚Ä¶ this is the kind of stuff that makes Jon Stewart’s job too easy.

It’s “very natural” for the world to be concerned about the U.S. government’s spending and planned record fiscal deficit, Yu went on to say in his email. Another global financial crisis triggered by a loss of confidence in the dollar may be inevitable unless the U.S. saves more.”

According to the Congressional Budget Office, the deficit is projected to reach $1.75 trillion in the year ending Sept. 30, 2009, which is when we decided to end our fiscal year back in 1974 in order to give congress time to balance the federal budget, which is laugh out loud funny today.

Mr. Yu referred to the Federal Reserve “as the world’s biggest junk investor,” and called Chairman Ben S. Bernanke “Helicopter Ben,” explaining that the Fed has dropped “tons of money from the sky since the sub-prime crisis.”

“The balance sheet of the Federal Reserve not only has expanded like mad but is also ridden with ‘rubbish’ assets,” he said.

Well, he certainly sounds confident that our recovery is right around the corner, don’t you think?

“China is the biggest foreign owner of U.S. Treasury bonds. U.S. data shows that it held $768 billion in Treasuries as of March, but some analysts believe China’s total U.S. dollar-denominated investments could be twice as high.”

In a totally unrelated story from AP News of the same day:

“The FDIC closed 21 banks in the first quarter, the most since 1992. The agency’s chairman, Sheila Bair, said that troubled loans continue to mount and weigh heavily on banks, along with $38 billion in charge-offs in the first quarter and $60 billion in set-asides for reserves. She noted that Tier 1 capital rose by $70 billion, though most of that was from government programs, along with dividend cuts and stock issuance. Though 97% of banks were well capitalized, the FDIC has just $28 billion in reserves to cover loan losses for the year ahead and no plans to tap the Treasury’s line of credit.”

So, Timmy‚Ä¶ is there any chance you could give us a looksie at your scratch paper?

Oh yeah‚Ä¶ things are going swimmingly over here, no doubt about that. I think I’m going to go lie down in traffic.