The July issue of The Niche Report is in mailboxes across the country and the cover story was written by me once again. It’s on HVCC, the Home Valuation Code of Conduct, which is a new set of rules that affect appraisals and appraisers in this country.

Just like when I did the covers story for The Niche Report in May… “Pigs, Puppets & People in Peril,” the July issue has another fabulous cartoon on the cover, created by my partner, Richard Taylor. He’s got more talent in his little finger than I do in my whole body. If you remember the May cover, the pigs were the bankers, so this month there’s a giant banker-pig on the cover, as you can see below.

I realize that many of my readers are busy and may not have time to read the story, so for those too busy to read an article that impacts everything in real estate for the rest of their lives, I thought I’d so a summary here. Ready? Go…

… Andrew Cuomo had a famous father so he got a job running HUD even though he had no experience in anything related to HUD and in fact had trouble spelling it. So after turning the GSEs (Government Service Entities) into GOEs (Government “Owned” entities), and being responsible for one of the biggest appraisal scandals in history, the State of New York decided that it only made sense to make him their Attorney General.

With me so far? Good.

… So, then he decided to investigate the GOEs for fraud and stuff, because he knew there was fraud going on because he’s the one that started the fraud department there. He threatened the new CEOs of Fannie & Freddie and they immediately settled and agreed to whatever he wanted. Since Cuomo’s a lackey for the banking lobby, what he wanted rules that put the bank in charge, while neutering everyone else.

… The new HVCC rules were born and the first thing they did was to cut the pay of the group of professionals that made the least amount of money of anyone during the housing bubble by 40%. Beyond that, HVCC basically puts the banks in charge of everything.

Okay… well, I hope that helps. But, in the event that you want more than the USA Today version of the story, why not take a few moments to click on the linked words about The Niche Report below and read the story in its entirely. I wrote it, so it’s not boring. I may not be Hemingway, but I don’t do boring, right?

I STILL Haven’t Had The 2 Minutes it Takes to Subscribe for FREE (How Rude, By the Way) So, Cal I Please Read The Niche Report Online?

And here’s the cover with the giant pig of a banker… when I see it, I think Kenny Lewis from B of A… the resemblance is uncanny. Don’t you think? 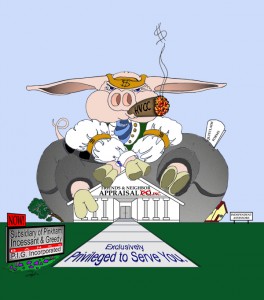