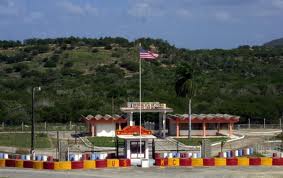 The prison at Guantanamo Bay, Cuba, was a lightning rod for controversy throughout the Bush administration, and when the Obama administration began it seemed to be struggling with the question of what to do with it, and what to do with those detained there. It’s wasn’t an easy problem to deal with, obviously, especially with President Obama having signed an Executive Order stating that the facility was to be closed by the end of the president’s first term in office.

Back then, the president also said that the CIA’s practice of waterboarding, which is said to simulate the feeling of almost drowning by almost drowning someone, IS considered torture and will not be used going forward. The Bush administration had defended the practice of waterboarding, but the U.S. Army and officials at the Pentagon have opposed the interrogation technique.

So, for a while there, the debate raged on. What should we do with the detainees held at Guantanamo? Even President Obama has acknowledged that it’s not an easy question to answer because many are considered dangerous. No one wants to see terrorists released and many don’t even want them imprisoned on U.S. soil.

Human rights organizations have railed about the prison, calling it the most notorious prison on earth, and that’s probably true. I can imagine that just the word “Gitmo” inspires fear in those that hear it, because once you go into Guantanamo, who knows if you’ll ever get out, and what they’ll do to you while you’re there. It scares the daylights out of me, that’s for sure. As a matter of fact, if I had to go to prison I think I’d rather go wherever it was that “Papillon” went than to Guantanamo.

Well, I’m confident that the Obama administration will come up with something eventually, as far as the detainees are concerned. They must have experts working on it, and the Republicans are certainly watching closely, ready to be critical of any plan that they believe Obama favors.

But, I don’t think the president should close Guantanamo. And perhaps we’ve eliminated the whole waterboarding thing a little too hastily, as well. I know my saying this probably shocks many of my readers, as I tend to be fairly liberal about things like this, but I’m serious here. I think we need to keep Guantanamo open for business and take another look at waterboarding… not as an interrogation technique, but just as a form of punishment for the new prisoners that I think we should send there.

You see, I have an idea that perhaps the Obama administration hasn’t considered as yet, and I think the American people, both those on the right and on the left, might see it as being a good one. After all, why should we close down a perfectly good prison that’s outside our judicial system? It might come in pretty handy… after all, it’s not like we can waterboard people just anywhere. If we close Guantanamo, where would we be able to do it? It would be a shame to close it down now, when there’s a whole new flock of dangerous terrorists and criminals that would be perfect for imprisonment at Guantanamo.

Bernie Madoff’s a no-brianer. Angelo Mozilo, the founder of Countrywide… done. How about Christopher Cox of the SEC? Please… I’ll take waterboarding for $500, Alex.

Joe Cassano, the man who brought us Credit Default Swaps and ran the unit at AIG? Hmmm… I’d check ‘yes’ on Guantanamo.  Hank Paulson… the guy that seems to have misplaced more money than anyone in history… you betcha’. Phil Grahm… yes, and could Phil please be given extra waterboarding? Ian McCarthy, the CEO of Beazer Homes… you’ve won an all expense paid trip to Cuba… I hear it’s lovely this time of year… except for the simulated drowning and the occasional German Shepherd sniffing at your testicles, it’ll be a gas.

Kathleen Corbet… I know she’s a “she” and all, but she was also the CEO at Standard & Poors, one of the bond rating agencies that slapped “AAA” on anything that they were paid to rate. To be fair, I’m okay with giving her a private room. And, if you don’t want her waterboarded, fine. Since she slapped ratings on everything improperly, lets try a little public paddling on her for size. I’d even be willing to go pay-per-view on something like that.

Then there’s Dick Fuld, the CEO of Lehman Bros. Let’s see what he has to say when he finds out he’s headed for Guantanamo. And there’s Herb and Marion Sandler, the couple who gave us the exotic mortgages that have served us so well. These two walked away with billions, and I think they’d look fabulous walking along the fence at Guantanamo Bay. I hear they enjoy Florida in the winters, so they’ll probably love the Caribbean.

As far as the cost of keeping Guantanamo open, in case that’s an issue, I think the answer is obvious… the inmates would pay for their own imprisonment! It’s perfect. And if we happen to catch a few Al Qaeda terrorists along the way, we’ll have somewhere to send them. They could bunk with guys like Stan O’Neal, the ex-CEO of Merrill Lynch, for example, thus providing yet another pay-per-view opportunity.

So, maybe getting rid of Guantanamo Bay should just be off the table for another four years. Just think… if these criminals knew they were headed to Guantanamo, imagine the people they might roll over on. We might find all kind of crooks coming out of the woodwork.

Human rights activists might still criticize the United States for maintaining such a facility, but would we really care? And besides, I have the feeling they’d mind Guantanamo a little less, if it were used to house the fat cats who’ve bankrupted our nation and most of the world. Let the guy you picked up in Afghanistan go home… he’s not that dangerous. Not when you compare him with the gangbangers of Wall Street.

Plus… I can’t prove it, but I’m here to tell you that we wouldn’t have to worry about anything like this happening again. Nope… problem solved as far as that goes. We wouldn’t even need any new regulations.

If executives knew that if they screwed up, they’d end up in Guantanamo… they’d behave like perfect gentlemen and ladies, and you can take that to the bank… pun intended.

Tell me, and I’ll send the list over to www.change.gov so President Obama can consider it. One never knows…