Home  »  Bank of America Says They Modified 50,000 Mortgages… Whatever That Means…

Bank of America Says They Modified 50,000 Mortgages… Whatever That Means…

Woohoo! Yea! The wonderful, caring philanthropists at Bank of America have reached out to help American homeowners because they see that our nation is in crisis and they wanted to do the right thing and help out wherever they could.

It shouldn’t come as much of a surprise that BofA’s being so helpful, after all they helped the U.S. government out by agreeing to buy Countrywide and Merrill Lynch, right? Maybe that should be their new slogan: Helpful to a fault.

People, please. Here’s the story as it appeared in the Wall Street Journal on May 23rd:

Bank of America Corp. has so far modified mortgages for more than 50,000 borrowers as part of its settlement of predatory lending charges brought by state attorneys general against Countrywide Financial Corp. The move potentially saves financially troubled homeowners as much as $823 million, according to a report provided to state officials this week. Under the terms of the settlement, which covers 390,000 borrowers, Bank of America agreed to, where possible, modify the terms of certain sub-prime mortgages and option adjustable-rate mortgages serviced by Countrywide, which was acquired by Bank of America last year.

Okay, so they were court ordered to do it, so fine. It’s still “good” though, right? Well, let’s take a closer look, shall we. Since “we” are the type to read things closely and all the way to the end, aren’t we?

First, let’s do a little 4th or 5th Grade math… nothing too elaborate… I’m using my daughter’s Hello Kitty calculator, for example. If there were 50,000 borrowers whose mortgages were modified, and the borrowers “potentially” received savings of “as much as” $823 million, the average amount of the “modification” would be $16,460, which over a 30-year term would work out to $45.72 per month on average. Right? I think that’s right.

So, here’s my problem… Bank of America’s calculator works differently than mine. Here’s what the article goes on to say:

Bank of America says that the modifications done to date are saving borrowers an average of $195 per month in principal and interest payments. Ninety-three percent of the modifications have involved sub-prime mortgages.

The biggest savings have gone to homeowners with option ARMs, which allow borrowers to make a minimum payment that may not even cover the interest due and can lead to a rising loan balance. Savings for these borrowers average $311 per month, according to Bank of America.

So, getting back to the math… how can the average borrower’s savings be $195 per month? Although perhaps an over-simplification, the cost of saving 50,000 borrowers $195 per month over a 30-year period would be $3.5 billion and change, and that a far cry from the $823 million the bank claims to have saved the 50,000 borrowers in the first paragraph. What’s going on here? Why can’t the numbers work… ever?

If I ever read an article on this subject and the numbers work, I think I’m going to send flowers and candy to the bank the following day. I won’t like them any better, but they will deserve the recognition.

I’m so confused it hurts. I’m staring at Hello Kitty and looking for answers. Please Kitty… please… help me to understand. Want a treat?

The article also went on to say that, for the borrowers that did not qualify for a modification, Bank of America provided them with “assistance valued at $22.4 million”. First of all, assuming we’re talking all cash here, that’s roughly two grand each. But why does it have to be assistance that’s valued at something?

Do you see why I get so upset about this stuff? In my experience, which is significant by the way, whenever this sort of nonsense is going on it’s because someone’s lying about something. And since in this instance, we’re talking about a bank here, it should go without saying that it’s the bank.

The rest of the article is even worse. What’s the re-default rate on the modifications? Bank of America’s not sure… the program’s so new and everything’s been happening so fast that it’s impossible to keep track. How this bank handles credit card charges and transactions is beyond me. If you can’t keep track of 50,000 loan modifications you’ve had months to work on, how in the world can you tell me the balance on my Visa card in real time?

This was my personal favorite of all the paragraphs in the article:

In some cases, borrowers’ monthly payments actually increased even as their interest rates were reduced in part because unpaid amounts were added to the loan balance.

Oh good, we’ll I’m certain that those mortgages will work out just fine as real estate values continue to plummet and rates have nowhere to go but up. Crackerjack work there, Kenny. (That’s BofA’s Mr. Kenneth Lewis to those that don’t know him like I do.) You’re still a weak-willed sycophant jackass, Kenny.

Look, if loan modifications aren’t taken more seriously and soon, we’re all in serious trouble. Foreclosures breed foreclosures. They lower housing prices, which leads to lower consumer spending… which leads to reduced corporate profits… which leads to more layoffs… which results in more foreclosures. As of today, we have essentially nothing in place to stop that vicious cycle. And if this Bank of America story is any sort of example of how we can expect banks to perform as a result of court proceedings, then that idea certainly leaves me flat.

I think I’ll stop at Home Depot later and pick up a pitchfork, just in case. Torches scare me… 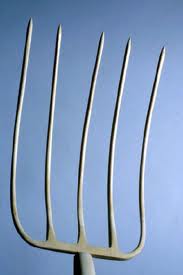